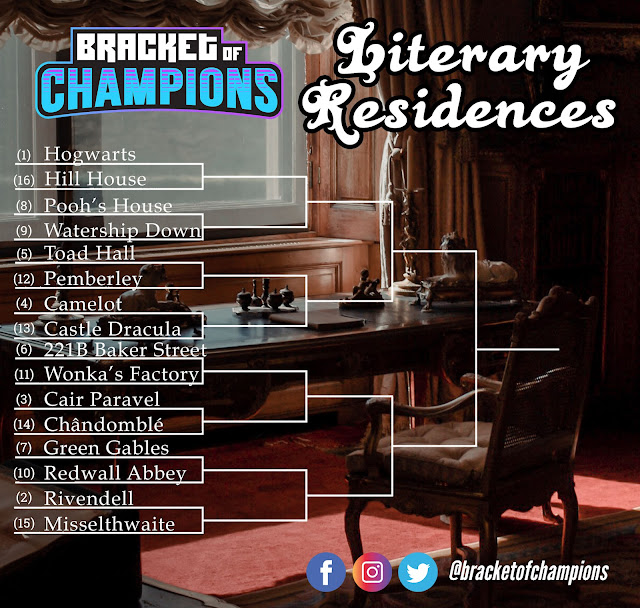 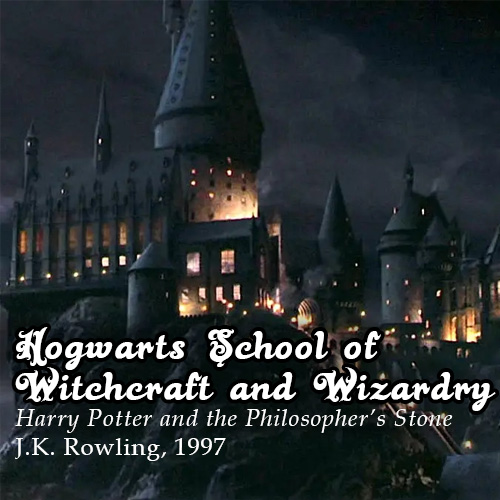 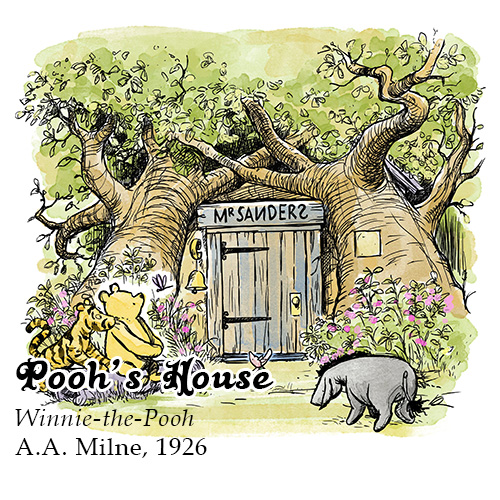 Once upon a time, a very long time ago now, about last Friday, Winnie-the-Pooh lived in a forest all by himself under the name of Sanders.

Pooh’s house is, quite succinctly, the house where Pooh lives. Pooh lives in a large, hollow tree overgrown with grass and plants. Above the door of his house there is a sign with the inscription MR. SANDERS, which may mean that such a person lived there before. There is a doorbell next to the sign, and a small sign below it with the words RNIG ALSO. Pooh also has a knocker on the door. Also, this is where Pooh keeps his honey pots. 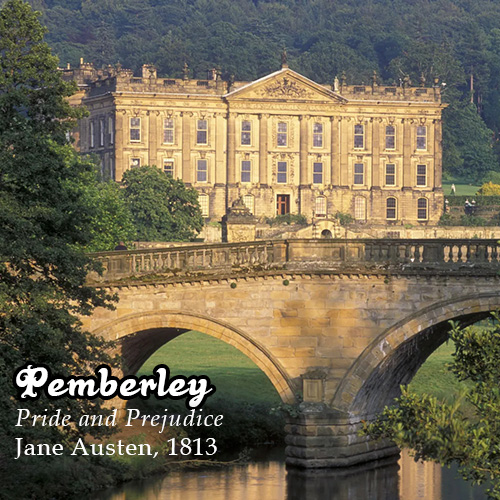 “It was a large, handsome, stone building, standing well on rising ground, and backed by a ridge of high woody hills—and in front, a stream of some natural importance was swelled into greater, but without any artificial importance. Its banks were neither formal, nor falsely adorned. Elizabeth was delighted. She had never seen a place for which nature had done more, or where natural beauty had been so little counteracted by awkward taste… to be mistress of Pemberley might be something!”
- Pride and Prejudice, Jane Austen, 1813
Pemberley is the home of Fitzwilliam Darcy, the male central character of Pride and Prejudice and the foil/love interest of Elizabeth Bennet. At Pemberley, Lizzie grows in the realization that she may have been wrong about Mr. Darcy after all. 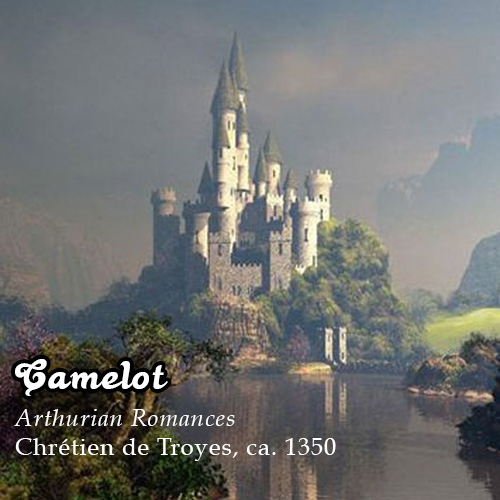 “On a certain Ascension Day King Arthur was in the region near Caerleon and held his court at Camelot, splendidly and luxuriantly as befitted a king.”

“‘Well,’ said the king, ‘let us make a cry, that all the lords, knights, and gentlemen of arms should draw unto a castle’ (called Camelot in those days) ‘and there the king would let make a council-general and great jousts.’”

Camelot was the legendary castle of King Arthur and his Knights of the Round Table, who set off for many adventures, including Sir Galahad of the Galahoodlians, Sir Lancelot, and Sir Not Appearing In This Film. 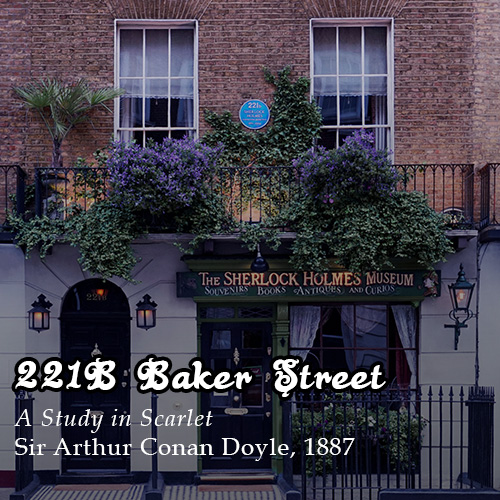 “We met the next day as he had arranged, and inspected the rooms at 221B Baker Street, of which he had spoken at our meeting. They consisted of a couple of comfortable bed-rooms and a single large airy sitting-room, cheerfully furnished, and illuminated by two broad windows. So desirable in every way were the apartments, and so moderate did the terms seem when divided between us, that the bargain was concluded upon the spot, and we at once entered into possession.”

221B Baker Street is the London address of the fictional detective Sherlock Holmes, where he and Mr. Watson spent many a pleasant evening chatting and solving mysteries beyond the understanding of Scotland Yard. 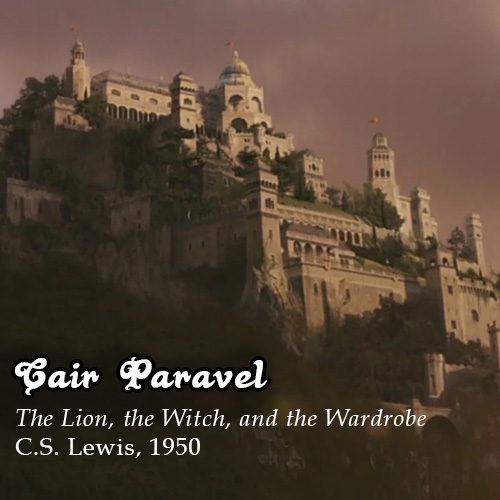 The Castle of Cair Paravel on its little hill towered up above them; before them were the sands, with rocks and little pools of salt water, and seaweed, and the smell of the sea, and long miles of bluish-green waves breaking for ever and ever on the beach… in the Great Hall of Cair Paravel—that wonderful hall with the ivory roof and the west hall hung with peacock’s feathers and the eastern door which looks towards the sea, in the presence of all their friends and to the sound of trumpets, Aslan solemnly crowned them…

Cair Paravel was the home of the human kings and queens of Narnia. Although it fell into ruin after the reigns of the Pevensies, it was eventually rebuilt by Caspian, whose descendants lived in it until the last battle of the Free Narnians. “A huge cherry-tree grew outside, so close that its boughs tapped against the house, and it was so thick-set with blossoms that hardly a leaf was to be seen. On both sides of the house was a big orchard, one of apple trees and one of cherry trees, also showered over with blossoms; and their grass was all sprinkled with dandelions. In the garden below were lilac trees purple with flowers, and their dizzily sweet fragrance drifted up to the window on the morning wind.”

Green Gables was the tidy, almost sterile residence of siblings Matthew and Marilla Cuthbert—until a red-headed orphan arrived and declared it had great “scope for imagination,” and changed both the house and its owners for good. 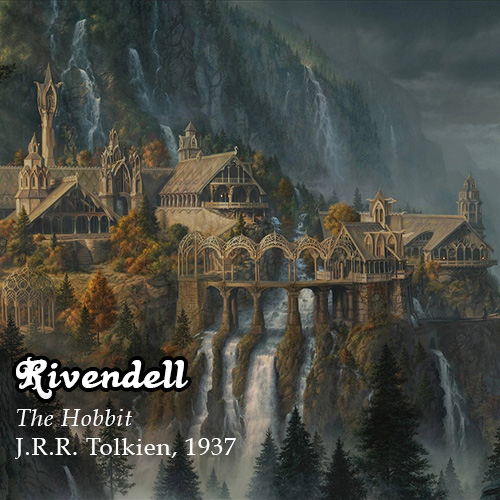