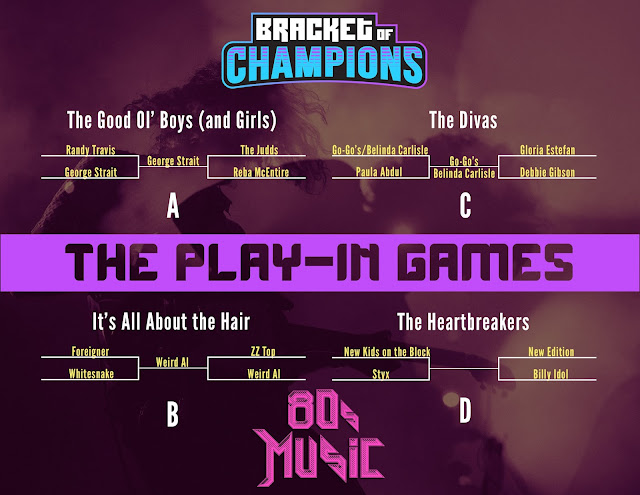 There were SO MANY deserving entries into this bracket, that we felt like 64 just wouldn't cut it. Enter the play-in games. 16 artists enter, only four advance. We've also upped our game a little bit - if you need your memory jogged on these artists, we've given you summaries of their 80s accomplishments, and a YouTube video to boot. We'll take on one play-in per day - you've just got 24 hours to vote! Remember (and this is of the utmost importance) - ONLY THEIR '80s MUSIC COUNTS!

New Kids on the Block

Maurice Starr’s groundbreaking boy band that set the stage for the inescapable 90s trend. Joe McIntyre was only 12 when they debuted.

Do we need to say more than “Mr. Roboto?” Nobody sounded like Styx. Nobody. And while they may have made most of their waves in the 70s, they didn’t slow down in the 80s.

The asymmetrical sneer started rocking MTV, and the rest was history, including a well-placed cameo in The Wedding Singer.