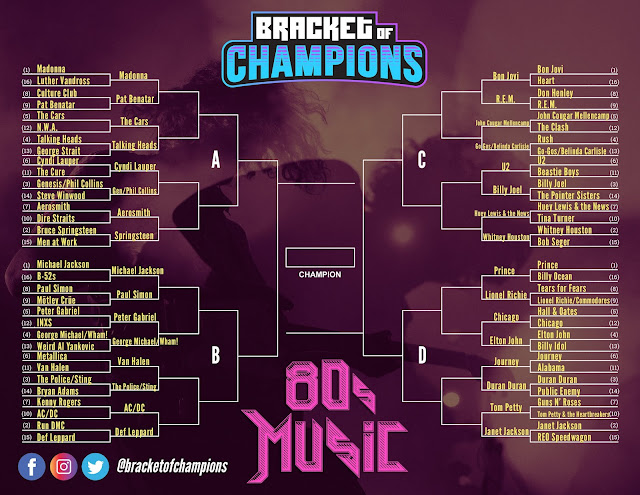 Voting is open for the "A" Group! Below, you'll be able to vote for each of the matchups. You'll also find detailed information about each artist's 80s music, so if you need your memory jogged on these artists, we've given you summaries of their 80s accomplishments, and a YouTube video to boot.

While most of the 80s starlets were blaring out how sweet love was, Pat Benatar told us that “Love is a Battlefield.” Nobody sounded like her… nobody ever has.


Ric Ocasek and The Cars took synth-pop and perfected it. They also perfected the music video game, doing things that MTV had never seen before.

Born in an art school in Rhode Island, this critically acclaimed band carved a niche with quirky, smart lyrics and diverse instrumentation. Byrne and co. are so much more than big suits and funky rhythms.


She was definitely so unusual. From the hair to the voice, Cyndi Lapuer captured our hearts and our imaginations. ‘Cause, hey… she just wanted to have fun!


Steven Tyler, Joe Perry, and the boys made a living off of pushing boundaries. Flamboyant, ridiculous, and always fun, Aerosmith revolutionized rock and roll (and they had awesome videos, too).