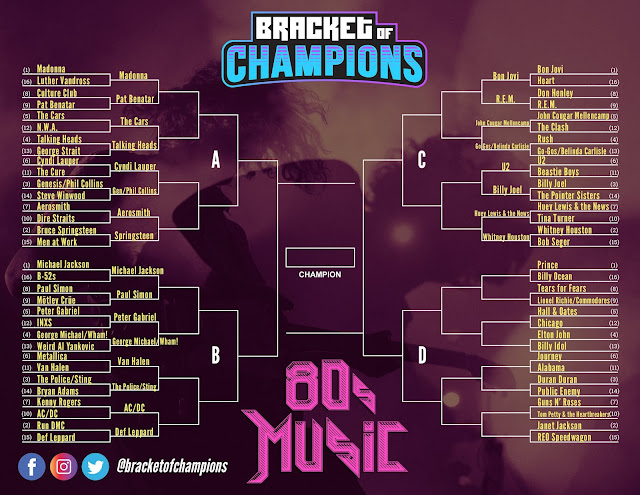 The full bracket voting is live! And we've got the "D" Group! Below, you'll be able to vote for each of the matchups. You'll also find detailed information about each artist's 80s music, so if you need your memory jogged on these artists, we've given you summaries of their 80s accomplishments, and a YouTube video to boot.


Pop star with an island flavor from his roots in Trinidad and Tobago. Billy scored multiple #1 singles and incredible international success.


British synth pop masters with a brain and two ubiquitous mid-80s singles. These guys were, and continue to be, staples on the radio.

The 80s albums:
The Hurting - Gold
Songs from the Big Chair - 5x Platinum
The Seeds of Love - Platinum


Outrageous! A solo run of 13 consecutive Top Ten hits following a stellar R&B upbringing with the Commodores, and he had the key to so many hearts.


Combining albums and singles (and spanning beyond just the 80s), Chicago is the second most successful American rock band in history, just behind the Beach Boys.


From his Rocket like start in the 70s, Sir Elton John continued strong through the 80s, releasing 9 albums of new material plus live and compilation albums. If the 70s made Elton a star, the 80s moved him into icon territory.


The asymmetrical sneer started rocking MTV, and the rest was history, including a well-placed cameo in The Wedding Singer.


The most successful country band of the 80s, with an incredible 21 number one hit country singles.


A band made for the music video who brought synth and new wave to the masses. These guys could easily be the face of the decade.


One of the most influential rap groups of the 80s, controversially moving the cultural needle. Chuck D and Flavor Flav, and the rest were hip-hop pioneers.

The 80s albums:
Yo! Bum Rush the Show - Gold
It Takes a Nation of Millions to Hold Us Back - Platinum

Rock band that crashed the pop party in a big way with a monster debut album. (You read that right, EIGHTEEN TIMES Platinum!) Axl Rose, Slash, and the band are absolute icons of the 80s.


So much more than Michael’s little sister (and the only sibling to mount a solo career to almost eclipse his). Janet took pop music in a whole new direction. We are a part of the rhythm nation!

Arena rock band that hit it big in the 80s with some all-time great power ballads. Their sounds just screams “80s.”