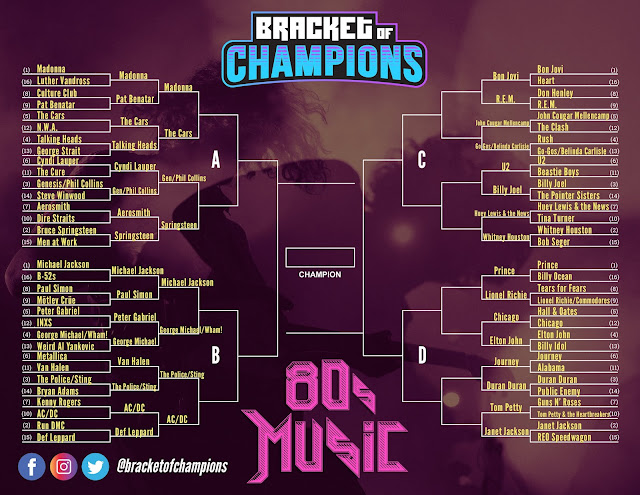 We've got Round 2 of the "C" Group! Below, you'll be able to vote for each of the matchups. You'll also find detailed information about each artist's 80s music, so if you need your memory jogged on these artists, we've given you summaries of their 80s accomplishments, and a YouTube video to boot.

College band that made the Athens sound famous. They helped define “alternative” and developed a massive cult following behind Michael Stipe’s iconic vocals and lack of enunciation.


Some people call him a poor man’s Springsteen, but tell me you don’t know all the words to “Jack and Diane.” John Cougar Mellencamp was the champion of the small town and we loved him for it.

The Go-Go’s blazed brand new musical trails, as one of the most successful all-female bands of all time. And then Belinda Carlisle went on to have a phenomenal solo career too.

Long Island piano man whose 23x Platinum greatest hits collection indicates how his songs became a part of so many people’s stories.


Huey Lewis and the News


Huey Lewis & The News
A working man’s bar band who made it big with lighthearted MTV videos, relatable songs, and a key spot on the soundtrack of another 80s icon: “Back to the Future.”

The voice! The biggest single in history! The first artist with seven consecutive #1 hits! And one of the strongest voices pop music has ever heard. It’s all Whitney.