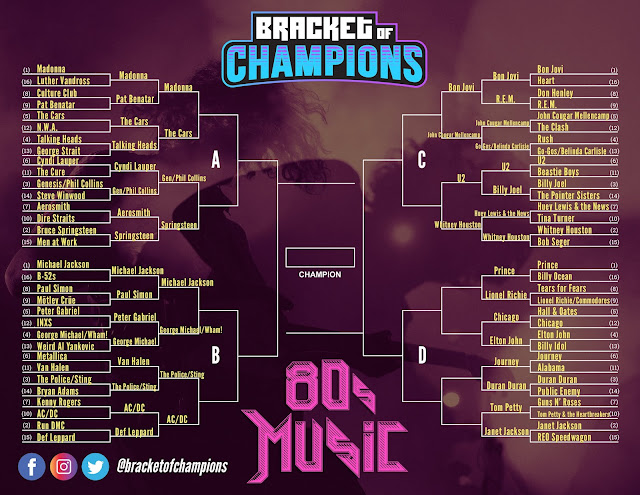 We've got Round 2 for the "D" Group! Below, you'll be able to vote for each of the matchups. You'll also find detailed information about each artist's 80s music, so if you need your memory jogged on these artists, we've given you summaries of their 80s accomplishments, and a YouTube video to boot. Remember: ONLY THEIR 80s MUSIC COUNTS!

Outrageous! A solo run of 13 consecutive Top Ten hits following a stellar R&B upbringing with the Commodores, and he had the key to so many hearts.

From his Rocket like start in the 70s, Sir Elton John continued strong through the 80s, releasing 9 albums of new material plus live and compilation albums. If the 70s made Elton a star, the 80s moved him into icon territory.


Combining albums and singles (and spanning beyond just the 80s), Chicago is the second most successful American rock band in history, just behind the Beach Boys.


A band made for the music video who brought synth and new wave to the masses. These guys could easily be the face of the decade.

So much more than Michael’s little sister (and the only sibling to mount a solo career to almost eclipse his). Janet took pop music in a whole new direction. We are a part of the rhythm nation!