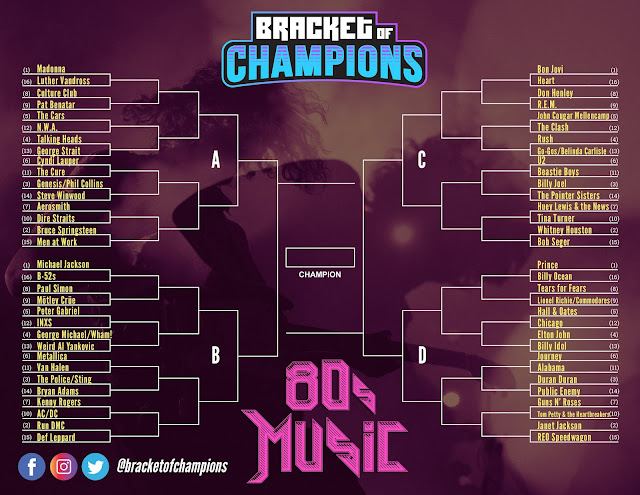 We're kicking off the full bracket voting with the "A" Group! Below, you'll be able to vote for each of the matchups. You'll also find detailed information about each artist's 80s music, so if you need your memory jogged on these artists, we've given you summaries of their 80s accomplishments, and a YouTube video to boot.


Boy George and the band didn't just create an iconic sound, they created an iconic brand. From the hair to the clothes to the tunes, very few bands embody the 80s like Culture Club.

The 80s albums:
Kissing to Be Clever - Platinum
Colour by Numbers - 3x Platinum
Waking Up With the House on Fire - Platinum
From Luxury to Heartache


While most of the 80s starlets were blaring out how sweet love was, Pat Benatar told us that “Love is a Battlefield.” Nobody sounded like her… nobody ever has.


Ric Ocasek and The Cars took synth-pop and perfected it. They also perfected the music video game, doing things that MTV had never seen before.


They may not have had the biggest 80s catalogue, but N.W.A. was unquestionably one of the most influential groups of all time. Launching the careers of Dr. Dre, Ice Cube, Eazy-E, and more, these legends created gangsta rap.

The 80s singles:  “Straight Outta Compton” and a few others.


Born in an art school in Rhode Island, this critically acclaimed band carved a niche with quirky, smart lyrics and diverse instrumentation. Byrne and co. are so much more than big suits and funky rhythms.


A workin’ man’s hero. They call him “The King of Country,” and it’s not for nothin.’


She was definitely so unusual. From the hair to the voice, Cyndi Lapuer captured our hearts and our imaginations. ‘Cause, hey… she just wanted to have fun!


The band that epitomized the gloomiest of answers to punk. But don’t be fooled; The Cure was hiding a surprising breadth and depth behind Robert Smith’s eyeliner.


Phil Collins led Genesis from the drums, and he led them to the pop Promised Land. Then, when he went solo, he only got better, becoming one of the biggest acts of the 80s (seriously… look through those singles).


Steve Winwood was a radio darling in the 80s. The guy knew exactly how to craft a pop masterpiece. Even though his voice was a little unusual, you sang along with every word.

The 80s albums:
Arc of a Diver - Platinum
Talking Back to the Night
Back in the High Life -  3x Platinum
Roll With It - 2x Platinum


Steven Tyler, Joe Perry, and the boys made a living off of pushing boundaries. Flamboyant, ridiculous, and always fun, Aerosmith revolutionized rock and roll (and they had awesome videos, too).


People remember Mark Knoplfer and co. mostly for fun songs like “Money for Nothing,” but it’s the melancholy cuts from their catalogue that stick with you. It’s no wonder that Brothers in Arms went on to be such a huge seller.


So much more than the Australians that sang about a Vegemite sandwich. These guys were a hit factory. Incredible songwriters, with hooks that stop you in your tracks.