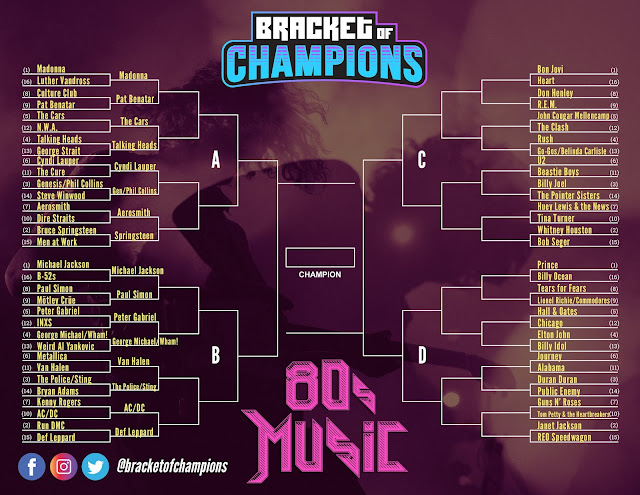 The full bracket voting is live! And we've got the "C" Group! Below, you'll be able to vote for each of the matchups. You'll also find detailed information about each artist's 80s music, so if you need your memory jogged on these artists, we've given you summaries of their 80s accomplishments, and a YouTube video to boot.


Transitioned from 70s rock to 80s pop and managed top ten albums in each of their four decades. Ann and Nancy Wilson fronted this trail-blazing band.


Eagles front man with the strongest solo career, whose “Boys of Summer” won the second ever MTV VMA for Music Video of the Year. He was the voice of a generation.

The 80s singles:  “Boys of Summer,” “The Last Worthless Evening,” “All She Wants to Do is Dance,” “The End of the Innocence,” “Dirty Laundry,” “Not Enough Love in the World,” “Sunset Grill,” and more.


College band that made the Athens sound famous. They helped define “alternative” and developed a massive cult following behind Michael Stipe’s iconic vocals and lack of enunciation.


Some people call him a poor man’s Springsteen, but tell me you don’t know all the words to “Jack and Diane.” John Cougar Mellencamp was the champion of the small town and we loved him for it.


This is British punk rock: loud, brash, political, and a lot of fun. These songs are absolutely indelible. (Note: if you’re looking for London Calling, it was released in December 1979).


Brilliant rock musicians with legions of fans. Neil Peart’s literate lyrics were backed by more sound and power than a trio should be able to create.


The Go-Go’s blazed brand new musical trails, as one of the most successful all-female bands of all time. And then Belinda Carlisle went on to have a phenomenal solo career too.


The three boys from Brooklyn started as a punk band, then Rick Rubin got his hands on them, they released Licensed to Ill, and the legend was born.


Long Island piano man whose 23x Platinum greatest hits collection indicates how his songs became a part of so many people’s stories.


Talented siblings who made their name doing BGVs for a variety of artists, which helped seed their multi-genre versatility. The Pointers were a constant on 80s radio and soundtracks.


Huey Lewis and the News


Huey Lewis & The News
A working man’s bar band who made it big with lighthearted MTV videos, relatable songs, and a key spot on the soundtrack of another 80s icon: “Back to the Future.”


Going into the 80s, Tina was considered a nostalgia act after splitting from husband Ike. In 1983 she released Private Dancer and the rest, as they say, is history. Tina became a bonafide solo star winning Grammys, headlining tours, and selling millions of albums.


The voice! The biggest single in history! The first artist with seven consecutive #1 hits! And one of the strongest voices pop music has ever heard. It’s all Whitney.

A megastar who became ubiquitous in the 80s when “Old Time Rock & Roll” showed up in Risky Business and Chevy played “Like a Rock” in every truck commercial for 20 years.