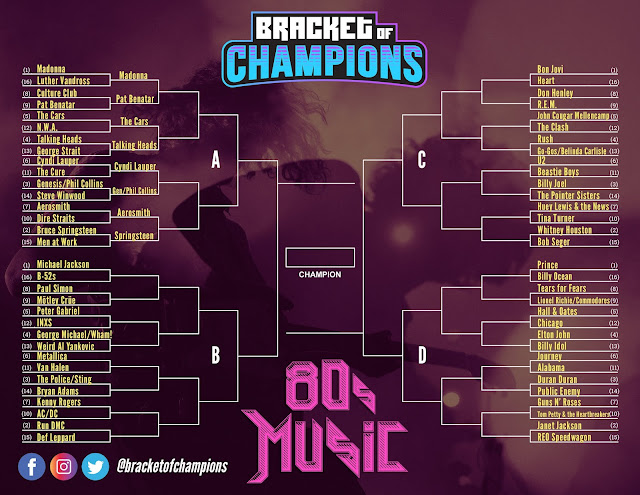 It's time to vote for Round 2 of the "B" Group! Below, you'll be able to vote for each of the matchups. You'll also find detailed information about each artist's 80s music, so if you need your memory jogged on these artists, we've given you summaries of their 80s accomplishments, and a YouTube video to boot.

Rhymin’ Simon proved he was no One Trick Pony with a remarkable reinvention in the middle of the decade. On the SNL stage with Ladysmith Black Mambazo, Simon surprised the world and gifted it with one of the greatest albums of all time.

The 80s singles:  “Graceland,” “You Can Call Me Al,” “The Boy in the Bubble,” “Diamonds on the Soles of Her Shoes,” “Late in the Evening,” “Under African Skies,” and more


Peter Gabriel did not look back after leaving Genesis in the late 70s. All he did was become the voice of a generation via John Cusack and his boom box and then have the most played video ever on MTV (Sledgehammer).

From the borderline Bubble Gum beginnings of Wham! to his much more sexually charged solo debut, few artists exemplify the 80s evolution of pop music better than George Michael. He clearly was in touch with the fans as his lowest selling album still went platinum and his solo debut went double diamond.

Van Halen absolutely owned hard rock in the 80s. All they did was put out 4 albums that went multi-platinum, one of which is one of the biggest albums of the decade and then fire their lead singer and proceed to finish the decade with two more multi-platinum efforts.

These Australians absolutely redefined hard rock in the 80s. With a double diamond album, and a signature style, punctuated by Angus Young’s incendiary guitar playing, AC/DC are rock legends.

What has 9 arms and rocks? We all know the answer is Def Leppard. Every album was huge and every single one of us knows at least some of the words to “Pour Some Sugar on Me.” And man... look at those album sales.